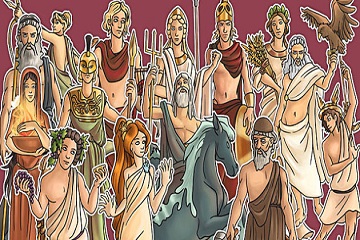 So one of the questions I could ask quite often is what happened to the Greek gods and goddesses. Why did they disappear so suddenly with no explanation. There are some interesting theories but in reality the answer is far less exciting and honestly slightly disappointing. There was no epic war to end all wars there was no Ragnarok like event to signal the world being reborn. The Greek deities were slowly phased out by Christianity and eventually forgotten by the Greek people. It’s easy to forget that these stories of Greek myth that we look at today were more than just a set of stories they once made up the primary religion of ancient Greece long before Christianity ever did. The fall of these Greek deities follows a pattern that we’ve seen across numerous countries Christianity and other religions bulldoze their way across the land and through a series of smear campaigns they demonize the worship of all other deities and this is something we’ve seen of Greek, Roman, Norse, Celtic and Slavic deities just to name a few.

Throughout ancient Greece there has always been a major cult to a period of time when the people would partake in the worship of these deities whether it was the Mycenaeans the Minoans the Orphic or even the Hellenistic period but this worship was always contested even before Christianity spread to Greece. The several scholars openly criticized the worship of these deities with the first being Xenaphonies who criticized the gods human vices and this is something that definitely contributed to their downfall. Even Plato believed there was one Supreme God one example of perfection in the universe that he named the form of the good. So with this metaphorical fire of descent already burning the arrival of St. Paul and Christianity in 49 ad then further stoked the flames disbelief and crisis of faith spread across the country like wildfire. To many of us today who have become bored with the idea of one omniscient perfect deity Greek mythology and many others provide us with an interesting set of alternatives. A set of deities who behave quite similar to us a set of stories that we can some way relate to.

However this argument was definitely one of the Christians most powerful tools in terms of tearing down other mythologies and systems of belief. St. Augustine and other Christian philosophers would often ask the question if these were higher beings worthy of worship then why do they act out of pettiness and jealousy. Now when you couple this with the fact that those refusing to convert to Christianity were hunted down and killed you have a fairly compelling argument to forget about Zeus and coal and adapt this new religion. These old gods never really went anywhere people just raised us Greek Orthodox under a Christian belief system and we’ve talked of these old gods been seen as a punishable sin they just faded into obscurity. In recent years there has been somewhat of a resurgence in the belief as well as the interest in Greek deities and this ultimately comes down to us becoming a more secular society. We can now discuss these ancient religions and mythologies without fear of being burned at a stake at least in most countries.

There’s no doubt that pop culture has played its part in helping raise interest in these deities whether it’s in the form of comics and books or movies and TV. We’ve even seen a rise in Hellenistic neo-paganism since the early 90’s which is now once again a recognized religion in Greece. Even before Christianity spread its way across Greece the worship of these gods had always been debated and contested. Similar to how today people still dismiss these deities because they believe their behavior to be immoral. As someone who runs a BLOG that mostly discusses mythology I’ve definitely had my fair share of people telling me that I need to stop what I’m doing because all you’re doing is spreading the word of the devil because I simply discuss these stories Christianity may not have been the entire reason the Greek gods were forgotten but it definitely was the nail in the coffin for many mythologies and religions unfortunately Greek mythology was so well documented that we were able to recover a portion of what was lost sadly that’s a fate that many other mythologies did not share so to answer the question of where did the Greek gods go know where they were once part of the primary religion in ancient Greece until they were replaced by Christianity and eventually forgotten that is until the rise of Greek mythology. Which now gives these deities the spotlight once again however whether you believe these deities were real and whether you choose the worship them is an entirely different story.