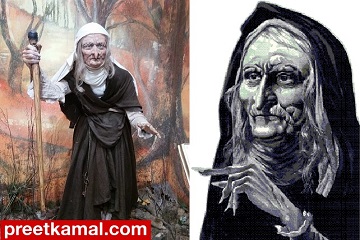 When we think of witches it’s quite easy to imagine that typical wart nosed woman saw him on a broomstick or some old hag stirring a ladle for a cauldron of boiling goo. Some might imagine them with pointy hats or hideous green skin, whilst others might look to more modern interpretations, whether it be a nose twitching housewife a know-it-all heroine or a trio wicked sisters. The actual history of witches and their tales are a lot more darker in nature so without further ado allow me to bring you four of the most chilling figures from witchcraft history.

Mother Shipton formerly known as Ursula son fell mother Shipton was the daughter of a local girl named Agatha who became pregnant at the age of 15, what’s strange about this case is that Agatha refused to reveal the identity of the father when prompted, she had no family and due to this it wouldn’t be long before the village deemed her something of a freak and banished her from the village. She would find refuge in a cave on the outskirts of Nia’s bra by the bank of viven knit. It said that on one stormy night in 1488 where lightning crashed and funder boomed out for gave birth to Ursula. It wouldn’t be long before the leader of monks at Ness bra took an interest in Ursula perhaps because of what legends say was heard for a test and hideous face. She was described as having a large crooked nose and would go on to possess a bent back and twisted legs. Even as a child she was a horrifying thing to look at which would lead many to speculate as to ever Agra had conceived the child with Satan himself hence her unwillingness to share the father’s identity. Ursula would be placed with a local family whilst her mother was sent to a convent in Nottinghamshire only to die a few years later, her slow would stray away back to the cave in which she was born and preferred isolation chosen to live there. She eventually married at the age of 24 perhaps some motivation to all those still out there looking for love that a face like this can indeed find happiness after all the lucky or unlucky bloke was a carpenter named To-bias Shipton and while he was seemingly besotted with her many suspected she had been rich Tim for how else could someone willingly make love to a woman like Ursula, their time together was short though because To-bias checked out of life early and by just two years after their marriage. It wouldn’t be until she was the oldest woman in the village did she earn a name mother Shipton Ursula’s witchcraft comes into question based on her prophecies she would make a living telling the futures of all those who came to visit her and her predictions were so accurate that she soon became known as the prophetess of knaresborough going on to rival the reputation of one such as the famous seer Nostradamus. She was even said to have messengers sent by the king to receive prophecies although she would also draw the attention of holy man and Cardinal Thomas Wolsey who wanted her burned for her heresy mother Ship-ton would go on to predict that wall C would meet a dreadful and shameful end. Funnily enough he was arrested for treason by Henry Percy of Northumberland where he would fall ill shortly after and die. There are other prophecies that mother Ship-ton has supposedly told including the plague the Great Fire of London the usage of flying vehicles the American Civil War and even possibly the Internet. She died in 1561 to the age of 73 but Judah her practices she was denied burial by the church and fuss her grave is lost to history.

Agnes Sampson was said to be a witch who possessed magical healing powers that she would use frequently in Scotland. Back when Scotland was a place of dark mystery and ominous intrigue. King James the sixth was returning from a Danish Court with his new bride and where he had learned of witchcraft and its Dark Arts that had plagued Denmark and Norway. The things he had seen had such an effect on him that when his ships were beset by storms upon his return to Scotland he blamed on witches. A great witch hunt took place in 1590 and it was not a good time to be a witch in Scotland. King James rounded up all the accused women of witchcraft and were torture Elise six of them until they each confessed a summoning the storm whereby they claimed to send devils upon the ships with their sorcery. This was all the proof that King James needed witch hunts raged across Scotland and soon profound healers like Agnes who were arrested and questioned by the king himself. Agnes Sampson underwent violent interrogation but she still stood in stiff denial of the claims that she was a witch. She was imprisoned and brutally tortured but still she would not confess to anything that even implied that she was studying the dark arts. It was understood that she was even strip naked and Farley examined by her captors as they lived for what they called the devil’s mark. Supposedly the devil would mock his witch servants in an area on their body that was not easily found. The idea was that so long as the Motte remained hidden the witch would never confess therefore Agnes was shaving of every hair on her body and lo and behold her captors found the walk of the devil upon her private parts. She was said to immediately confess her witchcraft the Polish discovery. Agnes was Holland burned at the stake her naked hairless ghost is said to roam Holy-rood palace where her cues that King James once lived.

Marvel Advan was said to be a witch from legend a supposed Good Witch who lived in a cave known simply as mother Ludlum’s cave. The cave is located near sorry in England and has been subject to many local legends. The legend has it that mother Ludlum would loan out enhanced utensils and items that the person borrow in the item would be cursed if they did not return them. A large cauldron was once borrowed and not returned and some mother loved them turned angry fearing her off the person who had borrowed the cauldron sought refuge in French from church in Surrey. The coachmen question remains in the church to this day. In another legend the devil paid mother Ludlum a visit disguising himself as a member of the village. He asked to borrow the cauldron but mother would love them realized that he was the devil. She refused to serve him and so that devil stole the cauldron and leg there Marvel Adam gave chase and the devil was said to make great leaps to escape thus creating a series of hills whenever he touched the ground. these hills are now said to be the sandstone hills that lie near Church in Surrey known as The Devil’s jumps. Marvel Advan was able to recover the cauldron when the devil dropped it and placed it in the church to keep it safe from his clutches. Another legend has it that the cauldron can be borrowed by climbing to the highest point of the devil’s jump and whispering to the spirits who lived there through a hole in the rocky outcrop. Supposedly there was one who borrowed the cauldron and failed to return it on time and fast the spirits condemned him to have the coach and follow him wherever he went. So distressed by the cauldron he sought sanctuary in French and Church where he collapsed and died leaving the cauldron in the church once more.

Alice Kyteler was the first woman convicted of witchcraft in Ireland in the 14th century. She had been married to three different men but on all occasions her husbands were said to die and she would inherit their wealth making her quite a rich young woman. When her fourth husband John fell ill he suspected witch cross was at work as he began losing his hair and fingernails. He alerted his family before his death but wasn’t able to change his will therefore when he died Alex still inherited all of his money which his family presented. John’s family went to the church to accuse Alice of witchcraft and because of this she would also gain charges of cutting up animals to sacrifice the demons and actually you may or may not have committed. She was also suspected of holding secret nocturnal meetings in churches to perform black magic along with her followers. One story has it that she even made it with a demon to enhance her own powers. After the charges were put in place Alice fled from Ireland to London where she disappears from history. However her maidservant was not so lucky, she was tortured by her captors and eventually confessed to most of the crimes accused against Alice going on to implicate her in witchcraft and the usage of the dark arts. She was flogged and burned at the stake the fate of Alice català though remains unknown.