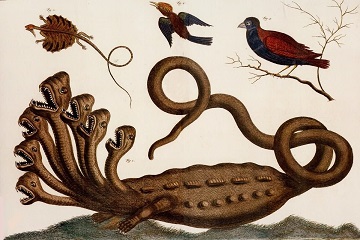 Every country in every region of the world has its own unique set of myths and folklore. these myths often feature some quite disturbing creatures and monsters and today we’ll be taking a look at ten of the most terrifying creatures from around the world.

Our first creature is definitely one that a spiked in recent popularity since the release of the video game until dawn it is of course the Wendigo. The Wendigo is a mythical creature that was believed to have originated from Native American mythology particularly from Algonquin folklore one of the biggest groups of Native American people. The creatures themselves were said to have been seen in the northern forests in the great lakes of both North America and Canada. It was a cannibalistic monster that would feed on anything from animals to humans. In some cases the Wendigo was thought to be an evil spirit that could possess human beings causing them to become monstrous cannibals of an insatiable greed.

For our next creature we travel to South Africa deep in the Rockies Valdez Heart where we encounter the Grootslang. a creature that many consider to be as old as the world itself. The Grootslang is an enormous serpentine elephant it somewhat resembles a regular elephant but it has a serpent tail and it resides in a cave known as the wonder hole. Legend states that the gods who created the group slang made a grave error. They gave it incredible strength cunning and intellect. Once the gods realize their mistake they split the creature into two creating the first elephants and snakes. despite their best efforts the original Grootslang managed to escape and will then go on to SaVe all of the resulting Grootslang. The creature was said to have a particular liking for precious gems particularly diamonds despite its cruel nature it’s believed its victims could plead for mercy if they’re presented the beasts of enough precious gems to satisfy its never-ending greed. There was a story that follows the English businessman Peter Grayson who in 1917 traveled to South Africa in search for treasure in the Rockies Valdez Heart. The businessman went missing when members of his groups were attacked and injured by lions this prompted stories and legends that the grootslang had killed him for attempting to steal its treasure.

So we find ourselves in yet another desert but this time it is the Gobi Desert as we take a look at the Mongolian Death Worm. The Gobi Desert is one of the harshest the most unforgiving places on the earth with huge temperature swings merciless winds and of course acid-spitting killer worms. The Mongolian Death Worm is believed to have in a five foot tall monster that not only spits fire and acid but also electricity merely touching the worm is said to cause excruciating pain and sometimes even death. The worm itself lives underground and is said to hibernate for most of the year except for June and July preferring to emerge from the ground when it has rained and the ground is wet. The one most commonly preys on camels frequently lain its eggs inside of its victims intestines the Mongolian Prime Minister of 1922 described the worm as a giant sausage as it has no legs or no hands and is red the acid the worm spits can corrode pretty much anything making it quite a predator from distance however up close the worm is capable of releasing an electrical discharge sure enough to instant kill any animal and even a fully grown human making it one of the last things you’d want to see if you’re stranded in the Gobi Desert.

It would be extremely hard to complete this list of that mentioned in any creatures from Japan so at number four we have the Jorah Goomer the Spider Woman. The Jorah Goomer is a Yokai that takes the form of a spider its name either translates to entangling burden or horse spider as it is capable of transforming itself into a beautiful woman and Lauren men back to its lair. Where it in tangles them in its web until it’s ready to devour them if the dragon won’t live by the muscles and often make their nests in caves forests and even abandoned houses in cities the diet primarily consists of young handsome men which sail or back to their home trapping them in their silk thread which is said to be so strong that even a grown man is incapable of escape and once entangled. the men are then injected with a venom making them weaker day by day until they are ready to feast on them. The jaraguá Hamas for deceivers no one expects the beautiful girl-next-door to be a man-eating spider.

Phonics creature would travel to the locks of Scotland and the rivers of Ireland or we find a shape-shifting water spirit known as the Kelpie if the Kelpie have been known to take the form of a human but they most commonly appear as black horses that haunts lakes and rivers and they may at first appear as a tame Pony but this is nothing more than a clever ploy to attract children and passers-by. Once they’re unaware victims are on its back the Kelpies clue like magical hide makes it so they can never dismount with their passengers now unable to escape the Kelpie then drags them down into the water drowning them before eventually eating them. In the human form the Kelpie have been known to materialize as beautiful young women Lauren men to a watery grave I’m say instead appear as a hairy human that hides in the river if you ever happen to come across a horse by a lake or a river then I suggest you think twice before approaching.

Inuit mythology is something that we’ve yet to cover in a channel but at number six we have the Qalupalik. The Qalupalik of human-like creatures that live in the sea and they are always mentioned as being female they have long hair green skin long fingernails and we can almost look at them as the inuit version of a mermaid. The legend states that they wear the same pouch so the inuit people used to carry their children the Qalupalik over do not use this pouch to carry around their own children but rather to carry around the children that they steal away preferring to target children who disobey their parents and misbehave. Before the creature has been known to appear they make a humming sound which serves as an early warning the children who do not heed this warning would then be placed in the creatures pouch and taken underwater. Where they would live for eternity never to see their parents again. It’s like that this story was used by parents to keep their children more behaved than close to them at all times.

A number seven we have the Aswang a creature rooted in Filipino folklore. the Aswang is a shape-shifting monster that has been derived from a combination of a vampire a goal and a witch. We can often be found living in towns and villages as a regular person they are quiet and very shy a night when the coast is clear they transform into a variety of different creatures ranging from a bat or a bird to a black dog or a cat. They only really transformed her in the evening because that is when they are most hungry they love to eat small children and unborn fetuses with a particular taste for the heart and the liver some Aswang are even capable of sucking children straight out of the mother’s womb while they sleep. The Aswang are most vulnerable during the daytime as they lack the superhuman strength are they possessed during their nighttime transformation. They can also be repelled of the use of garlic salt and religious artifacts such as a crucifix or holy water.

Ancient Greece has some truly fantastic mythological creatures and many of them are indeed quite terrifying but the one I’ve chosen today is the Linnaean Hydra. A gigantic nine headed water serpent that resides in the swamps of lerner rumored to guard one of the entrances to the underworld. The Hydra makes his list not only because of its terrifying appearance but because how difficult it was to slay. Each time one of its heads were chopped off two new heads would take its place. The Beast was eventually by the Greek hero Heracles whenever he cut off one of its heads he would cauterize the wound with torch stopping anything from spawning from the stump eventually when he came across the loss head which was believed to be indestructible he took a golden sword given to him by Athena removed its head and then buried it deep underground. So the creature in its head could never be reunited.

9. Ammit – Devourer of the Dead/Souls

Egyptian mythology doesn’t have an enormous selection of creatures or monsters but the ones that did appear were extremely feared. It was known as a Devourer of the dead and would wait alongside Anubis as a person’s heart was weighed against the feather of my heart. If the hearts were heavier than the feather then Ammit would devour their soul forcing him to die a second time omits at the front hind of a lion the lower half of a hippopotamus and the head of a crocodile in ancient Egypt all three of these animals were considered man-eaters and none were more feared by the Egyptian people.

The tenth and last creature on today’s list is the Skinwalker a Native American myth that is common amongst the people of the Navajo region the Skinwalkers were able to disguise themselves as animals either through transformation or possession and many consider them to be a type of which. Animals at Skinwalkers would most commonly be seen as included foxes wolves Eagles and owls but it’s important to note that they preferred the form of a coyote as they were often associated with witchcraft and trickery. A Skinwalker can possess an animal by looking into its eyes and it’s believed that that would often work for humans too locking eyes and taking control of your actions. Once they possess or transform into an animal they then possess all of that animals qualities they can smell and see things that regular humans could not and they can cover vast amounts of terrain in short amount of time. There are some rodents at States much like a werewolf a skin walker can be killed by calling them by their birth name.