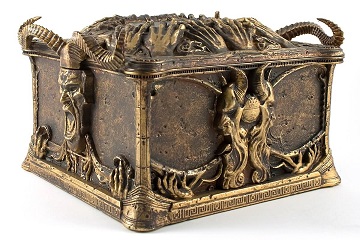 The box was never to be opened for it would unleash untold evils upon mankind but her curiosity could no longer be contained and she opened the box cursing humanity forever. Today we’ll be discussing the myth of Pandora and her box. The story takes place during a conflict between the gods of Olympus and the Titans. Zeus was furious of the Titan Prometheus who had stolen the element of fire from the gods and given it to mankind. As punishment for his actions Zeus chained Prometheus to a cliff and every morning an eagle would swoop down and feast on his liver. Every night his liver would heal only for the eager to return the next morning and feast again. Prometheus torture was not enough for Zeus he decided he would also punish his creation mankind for accepting the gift of fire from Prometheus. Zeus ordered the smyth of the gods a feast as’ to create a woman so beautiful that she was irresistible to both gods and men.

She was modeled on the goddess of love herself Aphrodite. When her feast us was done do sport her to life who named her Pandora. He had all the other God to bestow gifts upon her out of all of the gifts she was given it was the gift of curiosity from Hera would be her downfall. Zeus plan to give Pandora as a gift Epimetheus Prometheus’s brother. Pandora was sent down to earth along with Hermes who gave her a gilded box. The box was a gift from Zeus and she was told under no circumstance should she ever opened the box. When Epimetheus first glance at Pandora he felt instantly in love and she was to become his bride. Prometheus was aware that Zeus was still seeking revenge and he warned his brother to accept nothing from the God.

Epimetheus was so enchanted by Pandora he could not imagine life without her. On their wedding day Hermes came to Epimetheus and told him that Pandora was a gift from Zeus. A peace offering to symbolize that there was no longer any ill feeling between Zeus and his brother Prometheus. Epimetheus believed the words of Hermes to be true and ignored his brother’s advice. Every time Pandora looked at the Box she had to remind herself that she vowed to never open it the curiosity that had been gifted to her by Hera grew each time she denied open in the box until one day when she was unable to resist the curiosity and decided to look inside of the box. She took the golden key that hung around her neck and placed it in the key hole before she knew it there was a loud hissing sound and a horrible odor surrounded the air around her terrified by what she had just unleashed she quickly closed the box but it was already too late she had released all the wickedness and evil that Zeus had locked away in the box and she finally understood that she was nothing more than a pawn in a game played by the gods.

In the Box Zeus had hidden everything that will plague men forever sickness, death, jealousy, hatred, famine and passion all began to spread. Pandora began to feel the weight of the world on her shoulders. She felt responsible for what she had just unleashed upon mankind. Not knowing how to deal with her actions Pandora did the only thing she could and opened the box once again. She released the one thing that was left in the box. all of a sudden Pandora felt a warm and comforting presence and it was at that moment she knew that everything would be okay. She had just released the one good thing that Zeus had trapped in the box. Just as quickly as all the evils spread so did hope from that day. on hope would give humanity the strength to rebuild all they had lost and rise and succeed at a time when their existence was coming to an end. In this story Pandora is essentially the price mankind pays for the Promethean fire they are given. A task was to let loose all the evils upon men and destroy Prometheus creation. Pandora served as a warning to the destructive properties of humankind’s curiosity, sometimes you’re better off not knowing. You may be wondering why Zeus would place hope in the box if he intended just to destroy mankind. We can only assume that Zeus is true intention was never to completely destroy mankind he felt that the gift of fire gave man an unfair advantage and so he unleashed all the evils upon them and if they were to survive in this time of hardship then they had earned their existence and I guess hope was Zeus his way of giving mankind a fair chance.

Also Read : The Full Story Of Kratos From God Of War