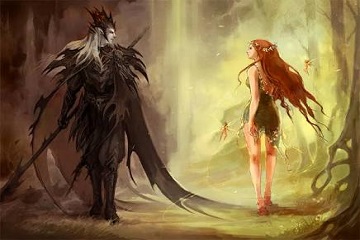 The story of Hades and Persephone is one of the most well known love stories in Greek mythology and over the years there have been a handful of different variations. Hades was known for rarely ever leaving the underworld but one of the few times he did venture above-ground. He came across Persephone the daughter of Zeus and Demeter and he fell instantly in love. when Hades consulted his brother Zeus who had previously promised him a choice of his daughters in marriage, he accepted the request of Hades but he knew that Persephone’s mother Demeter would never allow her daughter to marry the god of the underworld. Heartbroken at the idea that he would never be with Persephone the two brothers came up with a plan that would allow Hades to make Pasiphae his wife. The next morning Demeter and her daughter descended upon the earth and Persephone was left with the nymphs of the sea as her guides and Watchers while her mother tended to the earth. Knowing that the nymphs would never let Persephone out of their sight for fear of demitasse wrath Zeus had Gaia plant a narcissus flower in a nearby garden. Wandering into the garden alone Persephone saw the narcissus flower and was immediately drawn to its beauty. When she stooped down to pick the flower the earth beneath her began to quake and a gaping chasm soon appeared. From that chasm emerged Hades and his chariot of black horses. He grabbed Persephone before she was able to scream for help.

The nymph Sion had seen the abduction and she attempted to rescue Persephone but she was no match for Hades. Upon seeing her friend descend deep into the underworld she began to cry until she melted into a pool of her own tears form in the river Sion. When Demeter returned her daughter was nowhere to be found. When she asked the Niamh that she had left to watch over her daughter they had no answer. Furious that they were unable to protect her daughter. She cursed them with plumed bodies scaly feet and wings they would now be called the sirens. It was when the river Sion washed up the bells of Persephone that them as I knew something dreadful had happened to her daughter. Demeter was driven mad by her daughter’s disappearance, she roamed the earth for days on end searching and not fulfilling her duties as goddess of the harvest and fertility. The earth began to dry harvests began to fail plants withered and animals died because of the lack of food famine spread across the earth. The actions of Demeter resulted in untold misery the cries of those suffering could even be heard on Mount Olympus and Zeus knew that if he did not stop demitasse wrath humanity would disappear. He promised to bring Persephone back from the underworld if it could be proved that Hades was holding her against her will.

During her time in the underworld Hades had beautiful gardens built for Persephone and she was treated with respect and compassion. She saw a side to Hades that no one else had seen before and she began to fall in love with him. Hades had heard would Zeus proposed and readied his chariot to return Persephone but he was terrified that when given the choice Persephone would not return to him and so he gave her one last gift a pomegranate.

In Greek mythology it was believed that if one ate the food given to them by their captor they would always return to that person. When Persephone was asked to where she would like to live she told Zeus and Demeter that she wished to stay in the underworld with her husband. Demeter was infuriated with the response and she was convinced that Hades had somehow tricked her daughter. After a heated discussion Demeter made it known that if her daughter did not return she would never again make the earth fertile. Zeus decided that Persephone would spend the portion of the year with her husband Hades and the rest of her mother on Olympus. The portion of time varies depending on the story in some depictions Persephone spent a third of the year in the underworld and the rest on Mount Olympus.

In other stories because Persephone ate six pomegranate seeds she would then spend six months of Hades and the rest of the year of Demeter the arrangement pleased neither Hades or Demeter but they were forced to accept it. Many believe that the seasons of the year could be explained by this story in the six months that Persephone was not with her mother the land was not fertile and crops struggled to grow because in her sadness Demeter neglected her duties. These times of year became autumn and winter. when Demeter was reunited with this F&E the land became fertile and once again fruitful these months for spring and summer thus creating the cycle of seasons the death and rebirth of nature. The story of Persephone and Hades is one that has divided people for years there are those who believe that Hades was somewhat of a villain in this story taking Persephone against her will and forcing her to live in the underworld with him. There are those who believe Hades to have been a very misunderstood character cold and unwilling to leave the underworld but once he saw Persephone he began to change and over time she did fall in love with him. How do you guys feel about this story do you feel Hades acted as a villain or in the name of love do you think Persephone would have returned to Hades if he did not give her the pomegranate let me know in the comments below.

Also Read : What is The Philosopher’s Stone – Full Explanation