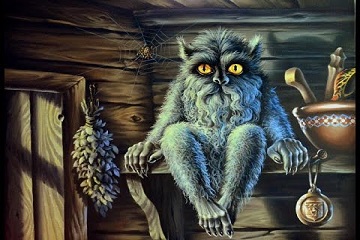 Slavic mythology and folklore is known for its unusual creatures and today we will discuss three of my personal favorites.

The Domovoi house dwelling guardian spirits often linked to a family rather than the house itself. The appearance of the domovoi varies from a small gray bearded elderly man to a dwarf like creature with horns and a tail. He can often be found at the center of the house underneath a stove however the domovoi prefers to be heard rather than seen. The domovoi seeks to maintain order and peace throughout the home if treated well he will help with chores around the house and has been known to bring good luck. leaving the domovoi favorite food such as milk bread and porridge is often appreciated and will keep the house spirit happy. If a domovoi is angered they will behave much like a poltergeist haunting the family and sometimes even injuring pets and cattle. A cold touch from a domovoi often foretells of misfortune the snuffing out of a candle or the visual manifestation of the domovoi can signify the pending death of a family member.

Leshy are spirits of the forest they are the protectors of the forest and anything inside. The leshy are known for having a strong bond of animals they are often seen being accompanied by either a gray wolf or a bear. The leshy shape shifters and they can transform into any animal or plant in the forest their natural form often resembles a large man sometimes covered in leaves. They have long hair and their beards are often made of living grass and vines. Their long limbs and their grassy facial hair means that the leshy camouflage well and can often be mistaken for a tree. The leshy stand their tallest at the center of the forest the further they stray the smaller they become. Once they reached the edge of the forest Valencia tiny and can even hide under leaves leshy may not be evil but they are indeed tricksters they have been known to mislead travelers and cause them to become lost in their forest they rarely cause harm to travelers but they have been known on rare occasions to have too much fun and accidentally kill their victims. If one be friends leshy they will learn the secrets of their magic. farmers and Shepherds would often give leshy the cross around their necks as a gift and in return the less she would protect their crops and sheep.

Also Read : 10 Most Ghastly Mythological Creatures From Around The World

The Bannik is a bathhouse spirit often obsessive cleanliness. the third or fourth room in a bathhouse was often reserved for the Bannik . The Bannik could often invite demons and forest spirits to share its bath. There were no Christian images allowed in both houses as to not offend the Bannik or its guests if a person interrupted a bannik while it was washing the Bannik would often pour boiling water on them or even strangle them in the steam. The Bannock had the ability to predict the future you would stand with your back exposed to the Bannik if your future was prosperous the Bannik would gently stroke your back however if trouble lay ahead the Bannik would strike of its claws.