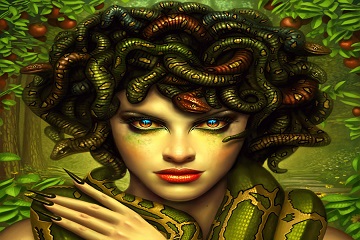 Hunted by many warriors who wish to claim the prize of her head. Many tried and many failed turned to stone of just a glance at her hideous face. Medusa was not always considered a monster in fact it was quite the opposite. She was the only mortal of three sisters born to four keys and seto two of the primordial sea gods. She possessed great beauty and many men lusted for Medusa but out of respect for the goddess Athena she remained pure and she would eventually become the priestess of Athena’s temple.

There were thousands who visited Athena’s temple just for a glance at Medusa’s beauty they even claimed that her hair rivaled that of Athena. It wasn’t long before Athena’s jealousy of Medusa became resent. One day when Medusa was walking along the shore she caught the attention of Poseidon the god of the sea and he was instantly infatuated with her. Medusa rejected multiple approaches from Poseidon because if she wished to remain the priestess of Athena’s temple she must stay a virgin. Poseidon was in the middle of a conflict of Athena and he saw Medusa as a possession that he could take from the goddess. Eventually Poseidon grew tired of being rejected by Medusa he decided that he will take her by force. Medusa in fear for her life ran into Athena’s temple in the hopes that the goddess would offer her protection. There was no protection given that evening and Poseidon had his way with Medusa.

When Poseidon had finished Athena did appear enraged by the events that had just taken place. She decided that she would punish Medusa as punishment against the gods such as Poseidon was considered unthinkable. Athena cursed Medusa the hair that she was once so envious of she turned into a head of venomous snakes anyone who looked into Medusa’s eyes would be petrified and turned to stone. Word spread of the monster that Medusa had become and she became the target of many warriors who wished to add her head to their list of trophies. All that Triad shared the same fate being turned into stone until the hero Perseus son of Zeus was tasked with retrieving her head.

In order to complete the task Perseus required aid from the gods he was given a helmet from Hades that made him invisible to Medusa. A pair of winged sandals from Hermes allowing him to reach Medusa. Athena gave him a bronze shield able to reflect the gaze of Medusa and lastly he was given a sword sharp enough to cut off the head of Medusa. With all of these divine gifts Perseus was able to behead Medusa at the time of her death Medusa was pregnant with the offspring of Poseidon and from her severed neck sprung the winged steed Pegasus. Perseus would use the head of Medusa to aid him in several adventures and it played a crucial role when defeating the Titan Atlas. Medusa is probably one of the most misunderstood characters in Greek mythology she’s often regarded as a cruel monster. She had only the best intentions and placed her trust in the goddess Athena who ultimately failed her and punished her for actions that were beyond her control. Her story shows us that even the gods are prone to the sins that they so heavily pride themselves above even in death. Medusa can be seen as a symbol of good as her head is used as a protective amulet to keep evil away.