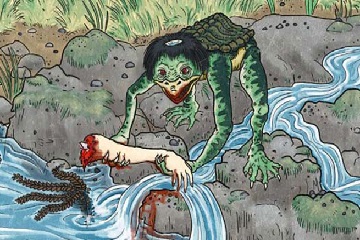 The Kappa row type of imply Kyoukai that can be found inhabited Aruba’s in traditional Japanese mythology in the folklore. Kappa itself was thought to mean river child but they did go by several other names including kama hiki meaning horse pala and cow atado meaning River Tiger. These were just some of the many names associated of the Kappa depending on which region of Japan you find yourself in there are close to 100 names relating to the creature with Kappa being the most recognized outside of Japan. In Shinto they were referred to as just one of the many sewage in a name given to a water deity. Depictions of the Kappa do change but they were quite commonly likened to a child in terms of size and stature. They had scaly reptilian skin which was known to range in color anywhere from blue to green to yellow and they had webbed feet and hands which served to aid them in their environment. As they were commonly found in the ponds and rivers of Japan. They were also said to be able to swim like fish and there are tales of local fishermen mistaken the Kappa for fish because of their smell. Although their appearance may vary from region to region. there are some features that seem to be common amongst the Kappa Lee’s been a beak they taught us like shell and a hollow indentation found on the top of their head which is commonly filled of water.

If this pool of water ever dried out or was split it was believed that the Kappa would lose its power and possibly even die been obsessed with politeness if one was to bow to a Kappa they will almost be obliged to bow in return thus spilling the water held in the plate on its head making them unable to leave the bow in position until that water is refilled. This often resulted in people attempted to trick and outsmart the Kappa because it was believed that someone refilled this water the cap would have to serve them for eternity. The Kappa are quite an odd bunch of creatures with a range of varying behavior they were usually seen as being trouble making tricksters who perform quite harmless pranks such as stealing food liftin women’s Caminos and scaring the locals. But at times their behavior took quite a malevolent turn with them drowned in animals kidnapping children raping women and even eaten human flesh. It became somewhat of a tradition or superstition for locals with her cucumbers into the river in order to appease the Kappa as many claimed cucumbers to be their favorite meal. Sometimes the Kappa was shown to have vampiric tendency Lauren people into the water drinking their blood and eaten their liver and other vital organs. In some accounts the Kappa gain their powers by taking a person’s shit or Kodama which is a mythical ball believes they contain one’s soul. Which also happens to be located inside the anus so how exactly the Kappa would abstract the Shiro Kodama is something I’ll leave up to your own imagination. In regards to the victimization of animals the Kappa had a particular taste for drowning horses in cows and the image or theme of the Kappa drowned in a horse can be found all around Japan.

In these stories it’s believed if the cap was caught in the act they could be made to apologize the city of Tono became an area known for its capper attacks especially directed towards women with several images around the 18th century showing women being raped by the Kappa. This in turn led to quite a few accounts of women being impregnated leading to an offspring that was said to be so repulsive it caused physical pain to look upon. When encountering a Kappa normally results in either being kidnapped raped or drowned and potentially even having your anus fondled. How exactly does one escape a Kappa we discussed earlier that bowing to a Kappa is a way to trick them into spilling the water located on top of their head and any method or technique that would spill this water would offer an effective escape. Another weakness involved the arms of the Kappa which could easily be pulled from their body if an arm became detached from their body the Kappa would have to share its knowledge or perform a favor in exchange for its return. Having some kind of expertise in wrestling would also come in quite handy as the kappa known to challenge humans to wrestling contests or tests of skill.

Despite the Kappa not exactly being seen as a friendly creature it’s thought if one was befriended it would provide a number of benefits and blessings. They would sometimes bring families fish which was regarded as a mark of good fortune. The Kappa also regarded as being highly knowledgeable in the field of medicine of Legends stating that it was in fact the Kappa that taught humans had to set broken bones their knowledge and medicine is something they would also share with humans they had befriended. They were even known to help farmers irrigate their land and receiving the blessing of a Kappa was a sign of a good harvest to come. Despite everything we’ve learned about the Kappa and they’re quite malevolent nature in modern-day Japan they can be seen almost everywhere quite often joyful and nearly always smiling being portrayed in quite an inviting manner. The exact influence and origin of the Kappas uncertain but some of the names that they go by it would suggest they may be partly based on either monkeys or Turtles. Perhaps even taking some inspiration from the now extinct Japanese river otter. Regardless of whether you see the Kappa as a mischievous trickster or an evil being they’re just one of the many unique and strange-looking creatures that Japanese folklore has to offer.